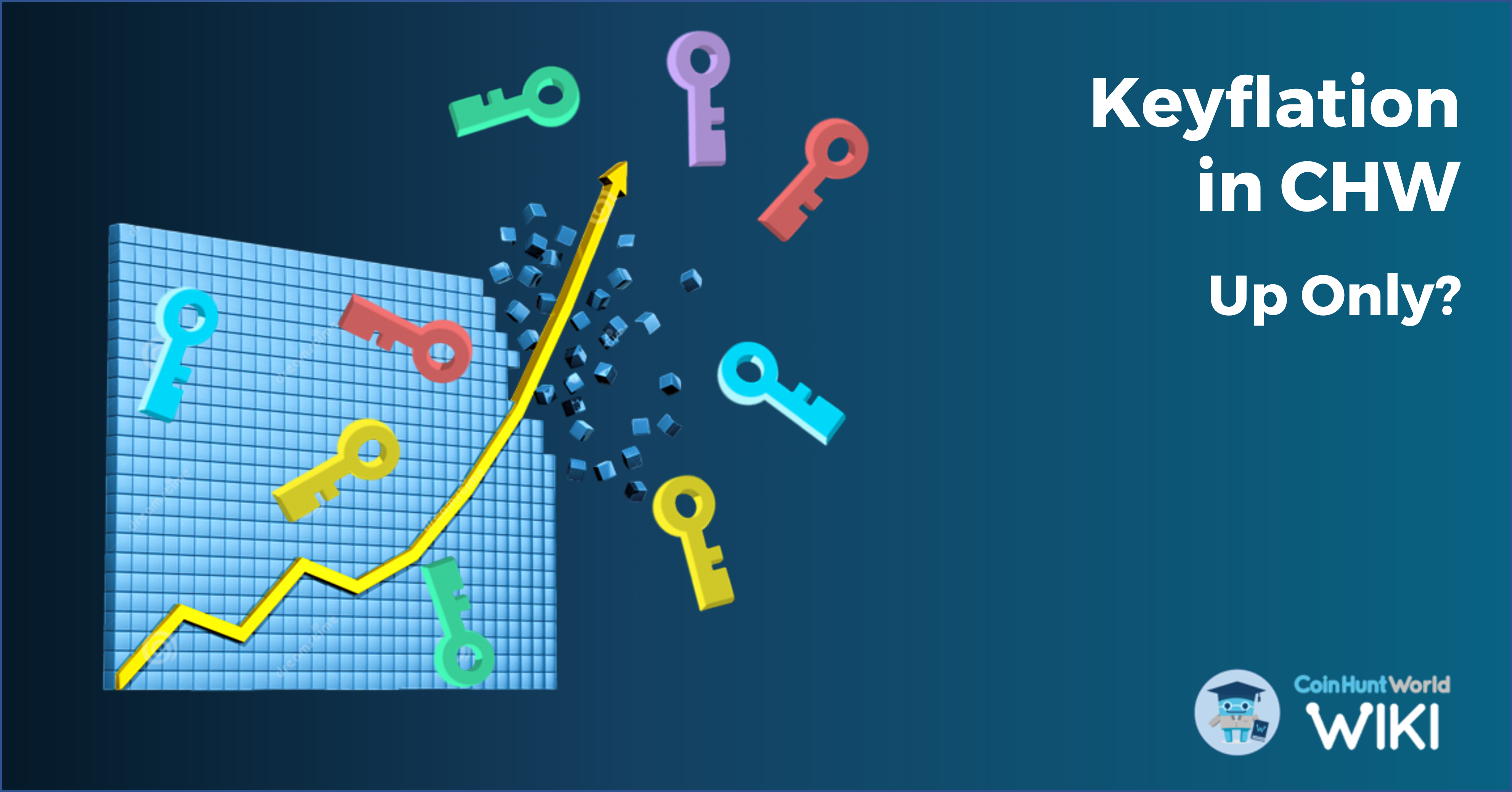 We all sense it – Auction House prices are rising.

But by how much? And is price inflation ‘transitory’ or permanent?

What are the ingredients for inflation?

Generally, a precursor to inflation is an increase in the velocity of money. Factors that contribute to this increase include:

With the major mid-April game update, we saw some of these factors take hold in the Coin Hunt World! economy. It was a stated goal of the creators to have ‘more keys exist in the economy’, and the new mechanics were a major move toward that objective.

Increased ‘money’ supply and a rise in player ‘wages’ came in the form of supercharged mystery boxes and walking quest rewards. On average, across urban and rural players, key income does indeed appear to be higher.

How much demand for goods has contributed to price appreciation has been difficult to quantify, but will likely become clearer as more structures are released and cubies begin to have utility.

How much keyflation have we seen?

Across all game items, in the three months since the walking quest/mystery box update, from April 14 – July 14, prices have risen, on average, 26%.

Let’s break down game items into categories and review inflation data for each.

First, we’ll take a high-level look at the major asset classes in the game.

Prices for both blueprints and resources have appreciated around 40%, with cubies seeing only a marginal increase.

There are several possible reasons for this dichotomy. For one, cubie supply could be close to meeting demand. As more cubies are printed, it stands to reason that dilution would put pressure on price, at least for now. It could also be that hunters just prefer to print their own cubies. Or, players see greater ROI possibilities in blueprints and resources. This rings true recently, as there has been significant alpha in stockpiling resources and then selling at very specific times.

Let’s drill down into the more popular resources.

Paint has surely been the sub-category with the highest price appreciation at 74%.

The green paint component of this number has been normalized, as the huge demand around the Hawaii event would have skewed the data. Even so, paint prices are rocketing higher.

This is in line with the theory that hunters prefer to print their own cubies. Or they could simply be printing more, or are stockpiling in advance of the Shark shop drop. In any case, Happy Hour looks like a decent time investment.

Resin is one of the few items in the game that has lost value. Too much overhead supply, and not enough utility. Yet.

Rare items have increased in price by twice that of commons and epics. Most of this is explained by Auction House action leading up to the Canada/USA events, so it appears that inflation is somewhat consistent across rarity levels.

At 26% in three months, keyflation is significant, though perhaps not as high as some had anticipated. But as stats and utility come to cubies, and we embark on building out the Cubieverse, it appears that keyflation will be with us for a while.

What game items do you think will rise in price the most over the long term?

The Auction House team has been deriving price data for several months, tracking almost 4,000 sales. Price charts for many items can be viewed on their individual pages on the wiki.