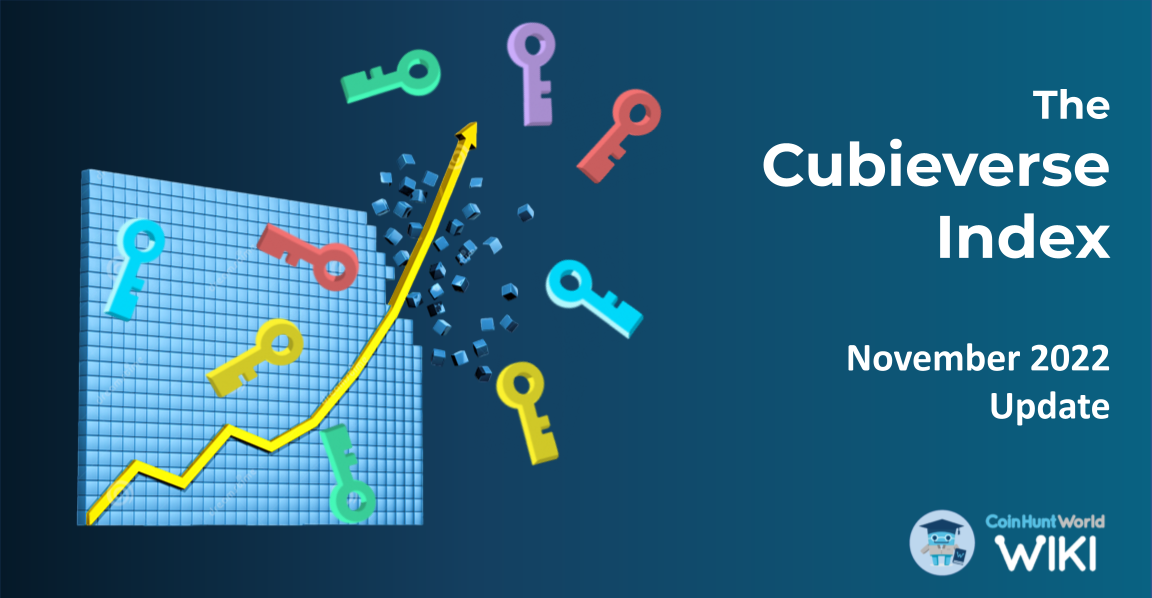 Is keyflation still raging in Coin Hunt World? Or has the economy become deflationary? Let’s look at the Cubieverse Index.

The index was introduced in August, tracking the performance of a portfolio that has one of every item in the game.

At that time, after relentless price increases during the summer months, the index stood at 133, meaning the portfolio rose in value by 33% since its inception in October 2021.

Keyflation actually peaked in September and the overall economy has been deflationary ever since.

This harmonizes with the general feeling that there are a lot of ‘good deals’ currently in the auction house, as overall prices are relatively cheaper than they were during late summer.

At first glance, this chart suggests value destruction. Ordinarily, owners of an asset don’t like to see price heading down. But as we drill down into the categories of game items, we’ll see how the recent easing of prices may actually be a net positive for the game economy.

We’ll separate the overall index into sub-indices of cubies, resources, blueprints. Then we’ll drill even deeper into resources and look just at paint.

While the chart shows a slight decline since late summer, cubie prices actually rose during October and the first half of November, something unseen in the overall index chart. Last week’s downtick reflects the sale of a few epics like the Fire Dragon and Gingerbread cubies at lower prices than in the past.

Here is where things get interesting.

The main reason why the general index has been down is resources. Recently, there have been some deep discounts on materials used to print epic cubies, but resources have been getting cheaper across all rarities.

Here we come to why this is net positive for the economy. If the divergence between cubie and resource prices continues, cubie profit margins will increase. More players will be encouraged to actually use their blueprints, rather than just sell materials on the open market.

This feels like a more intuitive approach to gameplay. It makes sense to be rewarded, not punished, for printing cubies.

The point could also be made that as cubies continue getting more utility, resource prices must be kept in line. If demand for cubies continues to increase, but they become more expensive to print, there just won’t be enough keys in the game. The entire economy would likely enter a deflationary spiral.

For fun, let’s look at a sub-sub-index of the Cubieverse.

Paint is a highly volatile asset, but generally has not seen keyflation. At least when taking the entire year into account.

After spring lows and summer highs, the paint index is currently oscillating around the 90 level, representing an overall price decrease of 10% over the last year. No Happy Hour for the next month will increase market demand. It won’t be surprising to see this sector rise.

Blueprints have come off their September highs, but continue to hold their value fairly well.

Keyflation has taken a breather, for now. In aggregate, cubies and blueprints have gotten somewhat cheaper, and resources have seen significant price decreases.

If these trends continue, it will lead to a more balanced economy and more intuitive gameplay.

Look for an update to the Cubieverse Index in January as we look back on all the action in Q4.

Until next time, happy hunting!

The Auction House team has been combining derived price information with user-submitted data for over a year, tracking thousands of sales. Price charts for many items can be viewed on their individual pages on the wiki.