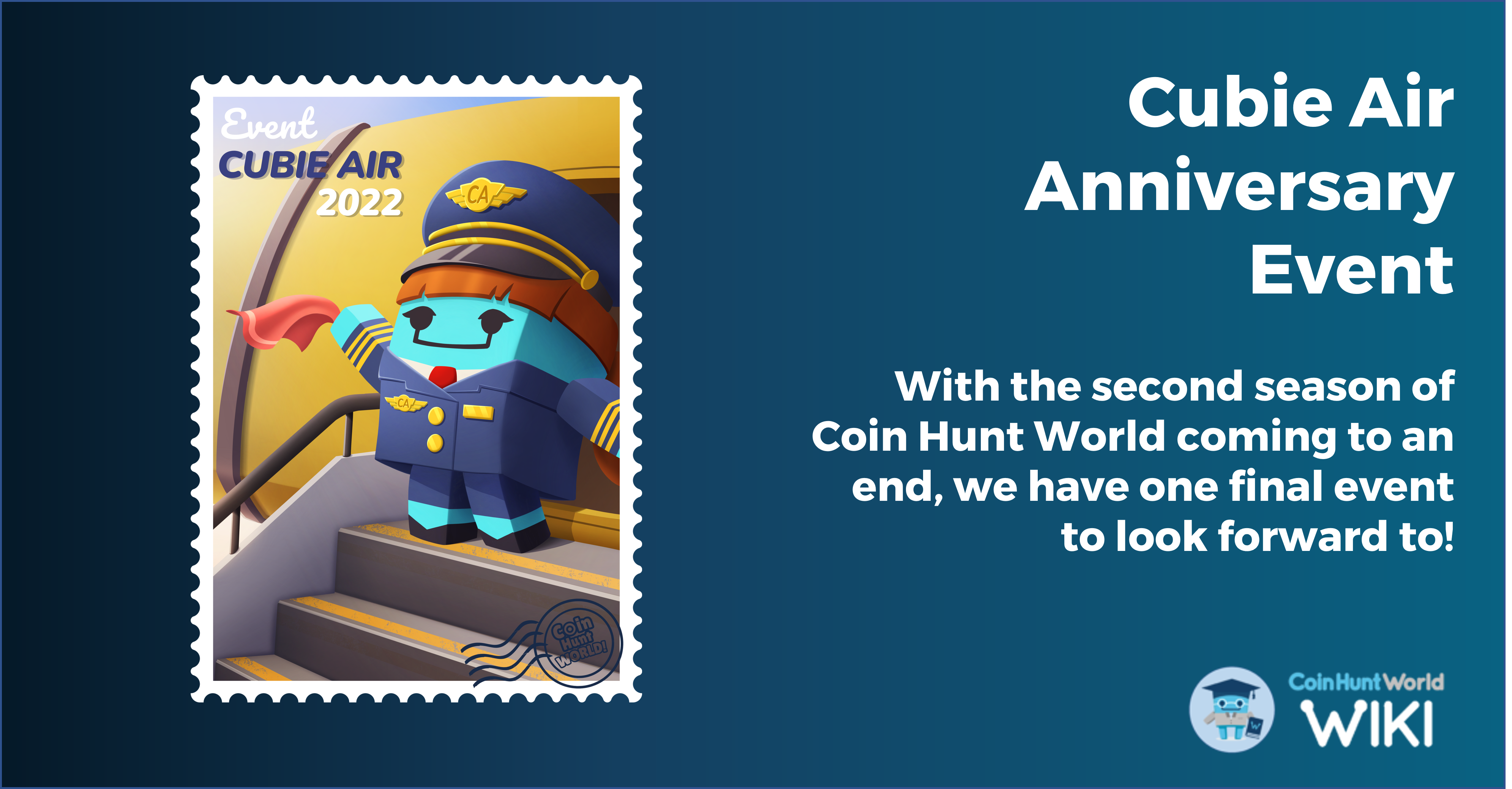 Ten days ago, we received so much new information during Hunters Lodge 5, that we weren’t able to cover it all in just one blog post. Last week we reported on the Sushi Structure and Quest, country Stamps, the Adventure Pass, Chill Wheel Quests, and yet another nerf to vault rewards. If you haven’t caught up on those, go take a look.

This week we’ll cover the larger topics: The Second Anniversary event is scheduled for September, to be followed by Tagging and then Structures. All of these items were discussed in the Hunters Lodge 5 on July 15th, and we’ll hopefully be all caught up on reporting that new information by the end of this week.

“Season Two” is coming to an end: Let’s Celebrate!

Coin Hunt World was Launched in August of 2020. “Season One” was the time from launch until the First Anniversary Event (Elemental Invasion). “Season Two” began with the Elemental Invasion and will soon be over.

As Illusionweaver told us during Hunters Lodge 5, in the Cubieverse, there are no planes, only Blimps! This Anniversary event will be celebrating the launching of this new Airline!

The theme for this year’s Anniversary Event is “Cubie Air.” Just like last year’s event, it was originally scheduled for late August but has already been pushed slightly into September. This year’s event will have more cubies, a quest line, a new “Challenge” mechanic, and probably some other surprises we haven’t been told about yet.

Beginning with this past Christmas Event, Quest Chains are in the process of being added. Illusionweaver told us he will be adding a Quest Chain to this Anniversary event and then the Halloween Event, and then all five of the CHW “major” events (Halloween, Christmas, CNY, Hawaii, Anniversary) will always have a Quest Chain moving forward. As with previous quest chains, we can expect to spend 1 Blue Key, 1 Green Key, 1 Yellow Key, and 1 Red Key to advance to the end, and be rewarded again with a Big Tickler box.

Separate from the Quest Chain will be a new “Challenge” mechanic. Above your Headquarters you’ll see a Cubie Air Blimp floating. When you click it, you’ll be asked to provide a Boarding Pass. We were told that “some” boarding passes will be given by the event Quest Chain, but players can purchase unlimited additional boarding passes at a price of 1 Red Key each.

After your challenge ends, you’ll be scored based on how many questions you answered correctly, how quickly you answered them, and how many lives you had remaining. This score will be used to rank you among all other players on the Challenge Leaderboard. Although you can attempt the challenge multiple times, only your highest ranking attempt will count.

And the Legendary goes to…

Similar to last year, the final event of the season will include a competition to win a Legendary Blueprint. Last year was just an auction, but this year will be more competitive in nature.

1. I understand why last year’s Legendary Cubie BP was done in the Auction House, but this year’s Challenge mechanic will be much better. Having skill at trivia is helpful in this game, but the majority of us go around grinding UV’s and the occasional Green vault, and have memorized a large portion of the trivia. With this new mechanic, they can introduce new questions and really see who knows their stuff. Also, it gives all players the opportunity to see yellow and red questions, which is currently limited to a small subset of players. This is a huge win in my book.

2. Naming this year’s common cubie after last year’s Legendary winner is a neat callback. I hope they continue that in future years.

(well, not so bad, but maybe room for improvement)

1. Imagine you are doing the Cubie Air Challenge and your goal is to get the highest crypto payout possible. You’ve completed the blue, green, and yellow questions. Now you’re at the red question. And let’s assume you have 3 lives remaining. Your red question takes you 15 seconds to figure out the answer. If you answer it now, you’ll have “Good” speed (not Great, not Perfect). That will pay out $35. But instead, since you still have 3 lives left, you answer wrong on purpose so you can try a red again for a faster speed and better payout. I don’t like this. Any mechanic that gives a possible advantage for answering wrong on purpose should be adjusted. I think if you’re on the final question and you have lives remaining, you should get to continue answering questions until you lose all your lives. And the score and payout should be whichever of those questions was answered the fastest. This would ensure that players never have a motivation to answer incorrectly, and anyone who can answer more than one red question correctly deserves to be rewarded for the fastest of those reds.

2. The Cubie Air Challenge will only count your highest score for the leaderboard ranking. A player who answers quickly, with a little bit of luck, could get high on the leaderboard with only one attempt. A player who makes multiple attempts and takes their time answering to be certain they are correct would not rank as high as the player who rushes and gets lucky. If the score was cumulative, then players who are good at trivia could score higher by making multiple challenge attempts. I think it would be beneficial to the challenge if more attempts led to a higher score.

3. What about Monoliths? The coolest features of any events so far was the teamwork mechanics involved. Monoliths, Cauldrons, and Christmas Trees added a lot of depth and fun to what would otherwise have been fairly basic RNG events of the past. I didn’t hear any mention of any randomized structure appearance mechanic like we had for last year’s Anniversary event, but I’m really hoping there will be Blimp Mooring masts or something that pop up on the map as you hunt.

What do you think?

Let us know in the comments below what you think about the upcoming Anniversary event! And stay tuned this week as we go over the review the last sections of the Hunters Lodge 5.