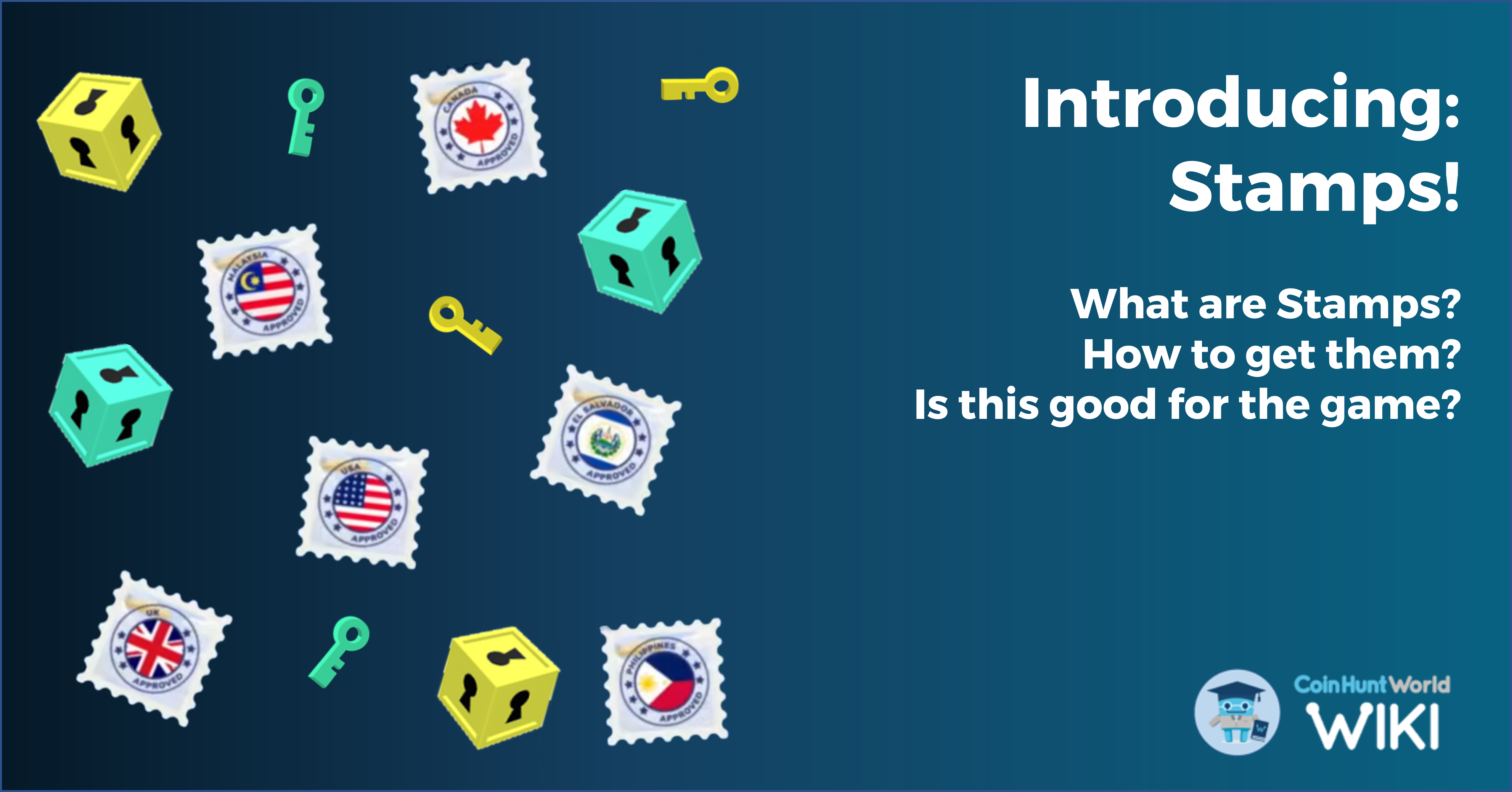 This article is part of our continuing series on the new features introduced in Hunters Lodge 5.

What in the world are Stamps!?

A better question to ask might be “where” in the world are stamps. Each stamp is available in a different country, so no stamp is everywhere, but everywhere has stamps! Some vaults in each country will drop a unique stamp with their country flag on it.

One interesting thing about these stamps is that they are not event-related. Right now if you get a resource box, the only thing that box will contain (unless there’s an event going on) is paint, resin, or maybe a colored Cubie Blueprint if you haven’t gotten all of those yet. This is the first time we’ve had a new item added to the resource boxes during a non-event time.

There is bad news: these stamps won’t drop from Blue Vaults or Uservaults. You’ll have to visit a Green Vault for a “low chance” or a Yellow Vault for a “high chance.”

They will also drop as rewards from Adventure Pass monthly quests, but only for the players who pay for the Premium Adventure Pass. Anyone opting for the free version will be stuck getting their stamps from Green and Yellow vaults only.

The stamps will be required to “activate” the Structure Blueprints that will come to the game in the future. Depending on what tier the Structure BP is, you will need either 1, 3, or 5 stamps to activate it. And the stamps must be unique. So for example, to activate the epic-tier Bank Structure BP, you’ll need stamps from five different countries. So unless you’re globetrotting for Green and Yellow vaults, you’ll have to buy what you need on the Auction House.

Most of the information we were given in the Hunters Lodge has led to endless discussion on the official Discord server. More information just leads to more questions. But for the stamps, the explanation was pretty straightforward, so there’s not much left to answer.

Obviously the drop rate is unknown, and I don’t expect that’s going to be given to us, so we’ll be left to figure that out on our own. Also, I would like to know if these will ever be used for Cubie Recipes or if they are strictly for activating Structure BP’s, but that’s not a question we’ll likely get answered directly, we’ll have to discover that for ourselves someday.

Kookoopuffs and Illusionweaver have been hinting for at least a year now that some locations will have their own resources that are only available in that region. They intend that this will create a global economy within the Cubieverse. The first instance of this happening was each country’s annual 2-day event, where only that country has access to those resources. Then we got the Volcano Ritual quest, which gives a steady supply of Koa Wood to the Hawaiian hunters. The problem with that, however, is that the Koa Wood is only available to players who did the Volcano Ritual, and so those players all have the Tiki Chief BP. Why would a player with a Tiki Chief BP ever want to sell Koa Wood. So that wasn’t a good implementation of a regional resource intended to stimulate global trade.

The stamps, however, should do very well in the AH, because they’re only valuable to players if they come in sets. I can’t do much with 20 USA stamps, but I could do a heck of a lot with 4 stamps each from five different countries. For that reason, its likely these will be highly sought after in the AH, especially from countries with less players. It’s tough to estimate what the going rate will be, but I imaging they’ll be pretty rare given that the majority of the stamp supply is going to come from players hitting regular greens and yellows (or those players paying for the privilege of a Premium Adventure Pass).

This game has consistently struggled to keep an equal balance in difficulty for both new and veteran hunters; for both blue-tier and white-tier hunters; for both urban and rural hunters. I’m excited for this mechanic, it sounds cool, it’s an interesting idea… but is this another instance of imbalance?

On the one hand, players hunting in a white-tier country could make a ton of keys selling stamps on the AH. On the other hand, they can only get the stamps from hitting higher tiered vaults or paying for a premium Adventure Pass (which probably costs them the same $19.95 USD it costs us here in a blue-tier country). Are players in those countries going to be interested in the up front costs (attempting green/yellow vaults or paying for a premium pass) or will they just keep grinding white vaults?

Here in the blue-tier countries, the majority of stamp collection will probably come from the players who have easy access to lots of Green and Yellow vaults. I can already think of several players in the Discord who will soon be expressing their displeasure that they have little to no opportunity to collect stamps on their own, forcing them to buy on the AH or give up on dreams of building a structure.

Overall, I think it’s important that they continue to add new mechanics to the game. Like previous changes, they will likely need to tweak things to get it just right, and I look forward to them figuring out how to make this balanced and useful. The idea that these stamps are required to build Structures is interesting. I’m not sure I agree with the concept that in order for me to build a structure locally I would need to have resources from another area; I mean, why should my Bank structure have to be “Malaysia approved?” Nonetheless, new features in the game are usually fun, and I’m sure we’ll find the joy in this once we’ve gotten used to it.