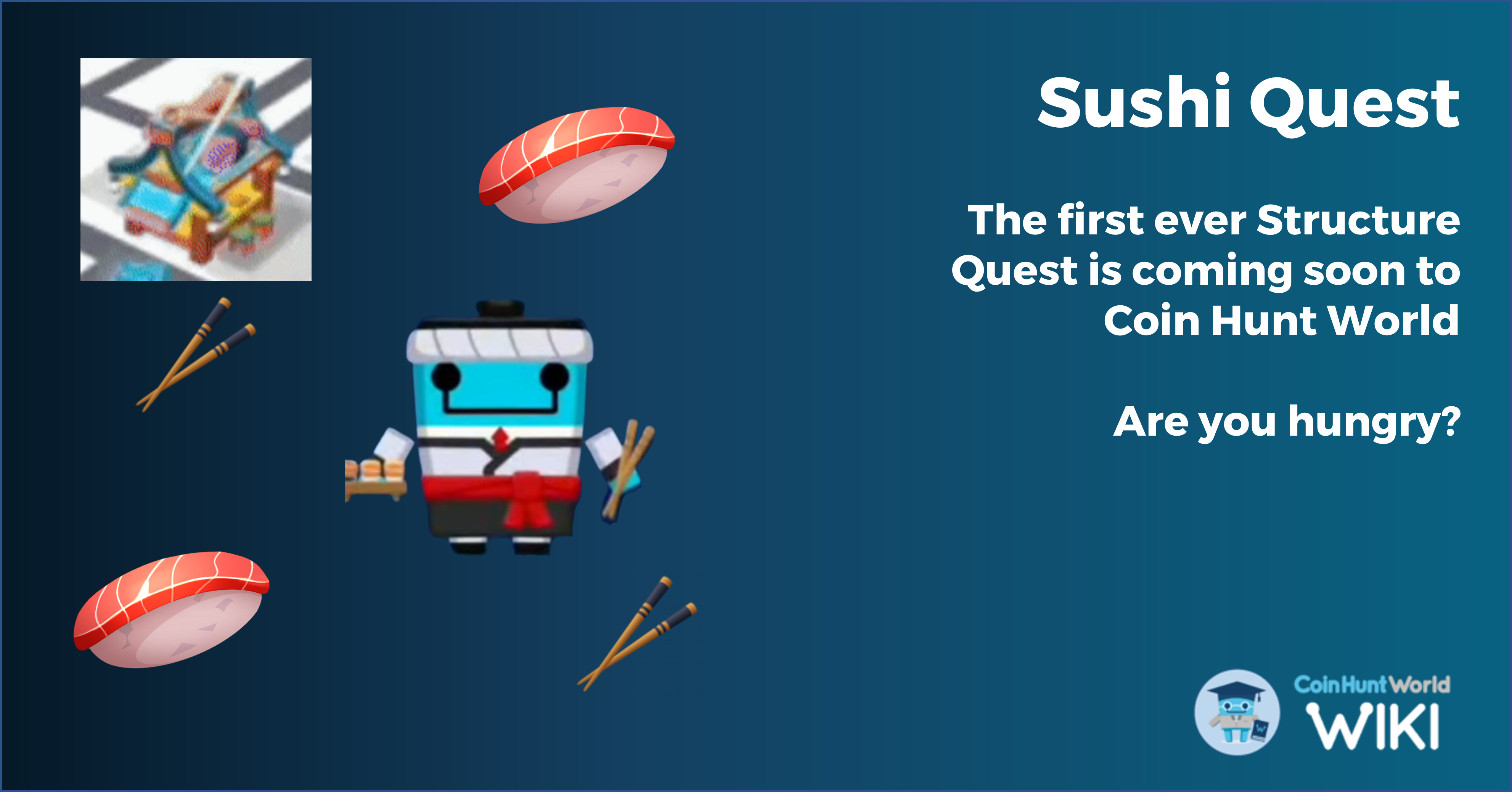 IW and KKP introduced the Sushi Quest as the first ever Structure based quest in Coin Hunt World. This is a beta test that is scheduled to be released in September. The quest can only be started at a Sushi Restaurant Structure.

The quest requires hunters to go to the Sushi Restaurant Structure in-game and have a meal.  To break it down, when the hunter sits down, they press “Start Quest” at the cost of 1 green key.  While the hunters dine, the quest cubie will dine as well.  45 minutes later, the quest is complete and a reward is received.

What’s the reward?  There will be a Sushi Chef blueprint (common) and a Master Sushi Chef blueprint (epic), as well as resources to print those blueprints.  Only 1 resource box will be given.  This quest can only be completed 1x/week. In the demo shown during the Hunters Lodge, the Chopsticks resource was shown dropping as a quest reward.

This quest is noted to be in beta and the developers are using it to collect data for future builds.

When IW started introducing the Sushi Quest at hunter’s lodge 5, my mind immediately thought about all the different types of cuisine the world has to offer and wondered “why sushi?”

A quick google search showed that Japanese food is the 3rd most popular food in the world with Italian and Chinese being 1st and 2nd.  I guess that answers my question!  I still think that pizza might be a better choice as pizza restaurants are a dime a dozen and affordable.

Personally, I love sushi and would be happy to try a new restaurant.  But what if the sushi restaurant has sub-par food?  I don’t want to spend money eating at a restaurant I don’t like, just so I can do the sushi quest.

Are sushi restaurants widely available in countries like Malaysia?  Or is it considered a delicacy which translates to $$$?  If I was in Malaysia working minimum wage, would I want to go to a restaurant that will cost me a week/month’s worth of wage just so I can get a blueprint?  More than likely I’ll sit in my air-conditioned car (because it’s hot as hell in Malaysia) outside the restaurant for 45mins so I can collect the blueprint.  Yes, yes, we’ve been told it’s not nice to just sit outside the restaurant to complete the task.  Sure, scout’s honor *wink wink*.

That being said, I am looking forward to the Sushi Quest and wish Vancouver will be getting a Sushi Restaurant Structure instead of just the capitals of each country.  Speaking of which, if the UK is getting 4 sushi structures just because they are made up of 4 “countries”? Those countries are considered to be local leaderboards in the Cubieverse. Shouldn’t Canada be getting 13 structures (10 provinces and 3 territories) and US 50 structures (50 states)??

View posts by Joone
Check out Joone's player page on the wiki!