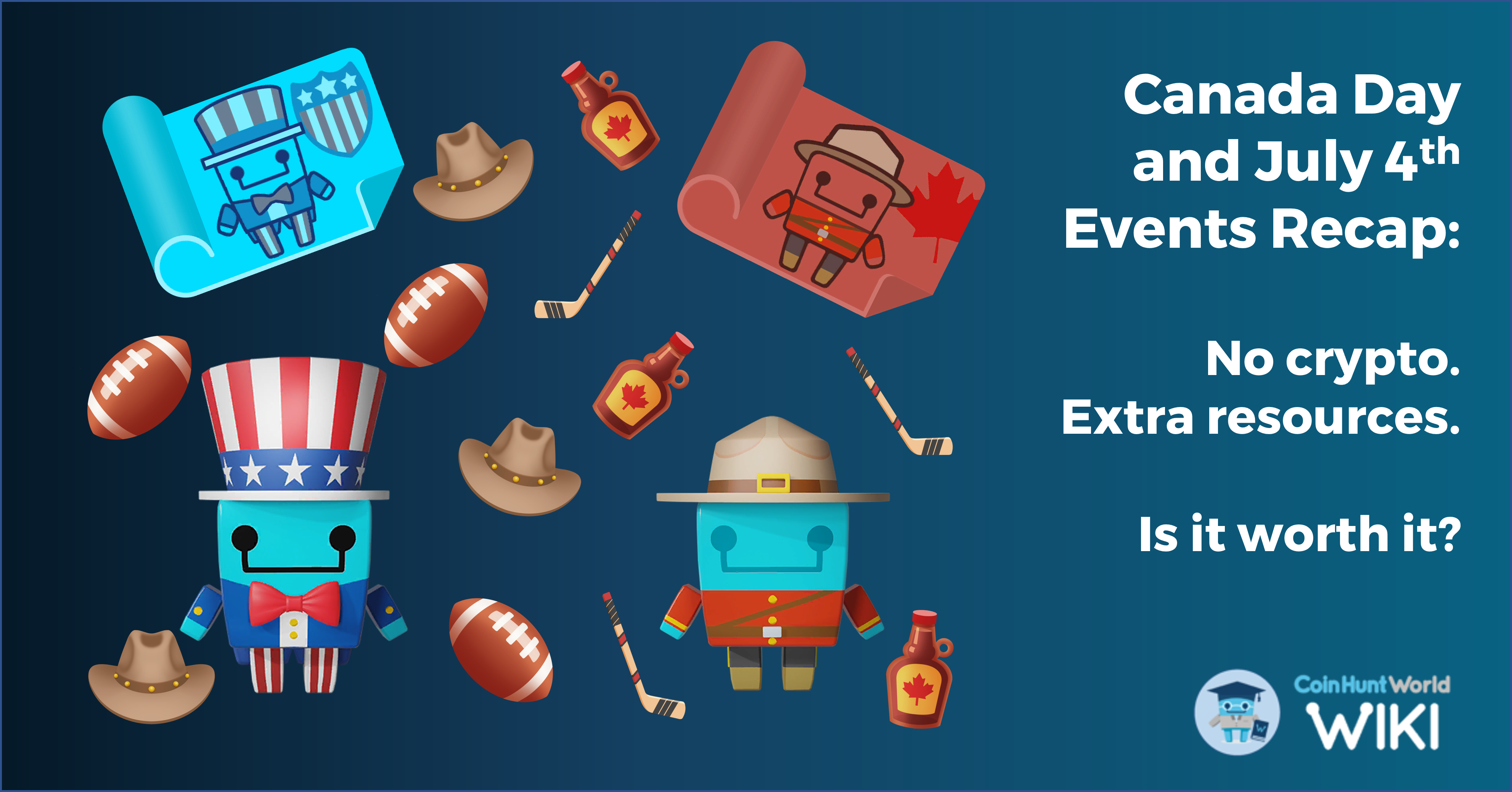 Thinking back to when I first started playing Coin Hunt World, the first great memory I had was hunting the July 4th event. I was brand new and worked hard to save up enough keys to go for a long hunt when the event started. A local player (and CHW legend) Beatsmebydre agreed to let me ride shotgun, and we both excitedly opened vault after vault hoping for a USA Cubie Blueprint or footballs. Most of the excitement for me came from the newness of it all. I wasn’t good at the trivia yet. I didn’t have many resources. I didn’t know efficient routes. But with 100 keys I was ready to take on the event.

Things were different this year.

I drove alone, and had enough resources to print a cubie within an hour. It was pretty mundane. I’m not upset about it, but its notably the least fun event I’ve played in this game. I found myself asking “Why wasn’t it fun?” I think for any player, their first year is exciting because each event is new to them. Once a player passes the 1 year mark, future repeat events (Halloween, Christmas, etc) are still likely to be fun and engaging because of new blueprints and new game mechanics. Those changes and new things is what makes events “special”.

But something is different about Canada Day and July 4 events: they are the first annually recurring events with no new blueprints and no new game mechanics. They are also the first two events with no crypto payout. This combination sets the stage for an underwhelming experience for long time players.

I don’t expect that the developers will make every event new and exciting. Events such as these country-specific “mini” events are just going to be simple repeats of the previous year, and that’s okay. But I find it hard to be enthusiastic about the event when there’s not really much to gain.

So clearly I’m unenthusiastic, but…

…that doesn’t mean these events are of poor quality. It might be that the event is more enjoyable by first-time players, or it might be that I have high expectations. There are thousands of other players with their own opinions, and surely many of those people have never played these events before.

Let’s hear from the players!

I reached out to some of players via DM, and others are messages sent by players publicly on the CHW Discord or Subreddit.

“How do you feel about not getting crypto from blue vaults?”

I think for short events like these the “no crypto” is fine. However on the longer 7-10 day events you’ll really feel the difference and start wondering if it’s worth it to play the events.

I live in Seattle and visited the Vancouver area so I had access to Green/Yellow vaults, so it didn’t bother me as much as it might more rural players about the no-crypto.

I made the commitment to trusting the devs that the amount of resources gathered would offset the removal of crypto rewards. Checking the AH activity in regards to Hockey sticks and Syrup, I think going after resources hard was the right call.

Initially I was a little disappointed but collecting the cubies and resources is so fun that I still get great satisfaction from playing.

Hunted for about 2 hours. It’s cool to see the different color reward boxes but the excitement wore off quick. I like turning blue keys into crypto.

The no crypto from UV is why I won’t be using the app as much during the events. The devs can do what they want. Pay with your wallet/time.

I’m not going to list a quote from every person I talked to, but the general consensus was that it wasn’t that bad. If all you care about is crypto, then take a 2 day break from the game. For those people, this event is definitely no fun; but for all the other players, it doesn’t seem to be a deal breaker. The chatter in the Discord showed many players saying they won’t be going “all in” like they might for other events, but that they’d still do some hunting. I even saw some players saying they were doing green vaults only, which is a great way to get both crypto and resources. It’s a shame the green vaults don’t pay out in a larger resource quantity though.

“Was the event too easy, too hard, or just right?”

I’ve hit about 60 vaults since the event started. I got the BP on the second vault I opened. Haven’t printed yet. I’m 100 footballs short so hopefully tomorrow! Difficulty to obtain resources is fair and as expected for the most part. Those dang footballs are elusive though!

Yea, I got them all [referring to the resources required to print]. I’m vancouver based and just walked my normal route so it wasn’t hard at all.

Footballs are elusive as hell. Ran out of vaults to hit.

Everyone is busy for the 4th with family outings, fireworks, etc… getting some quality hunting time during the this event can be hard to do for some.

Out of the available 48 hours, roughly 30 hours was dedicated to hunting/walking quests. In total, 12,450 hockey sticks and 32,750 Syrup had dropped for me. (That’s 902 vaults). It was too easy but fair trade off for removing the crypto from the events.

It was mostly balanced at least for me. Sure I got a lot more hats than footballs but after about a dozen or so vaults I had 500 hats. A dozen more and I probably would have got all of them. The footballs should be a little less rare, I didn’t get too much of those. I think the football drop could be tweaked but yeah, props to the devs, they did alright.

This one is pretty straightforward to break down. Since every blue vault drops 50 resources, and from player reporting we know that footballs drop about 25% of the time, simple math tells us it takes on average 80 vaults to get enough footballs (or hockey sticks). And you’ll always have cowboy hats (or maple syrup) in excess. Of all the players I spoke to, every single one had obtained the BP before they had enough resources to print, so the limiting factor is just the ability to solve about 80 vaults. Whether or not that’s “easy” depends on your own time availability and local vault density. Solving 80 vaults in 48 hours to get everything needed to print the cubie is certainly on the “easy” side when compared to other events, but a lot of people make plans for these holidays and two days is a short timeframe if you’re already busy with real-life events.

“Did you cross the border?”

A few players mentioned on the Discord that they’d be hunting both events this year. This was possible before, but was glitchy and relied on moving your HQ to make it work. These events are the first time that players can easily hunt in another country and participate in the event. Knop was kind enough to share his story with me.

Knop and his girlfriend traveled from Seattle to Vancouver. He already owns the Canada Cubie Blueprint and USA Cubie Blueprint, so he was really just in it for the resources. “Coin Hunt was the catalyst, but not the only reason,” he told me via Discord DM. “We took the opportunity to take a day trip up.” It sounds like the chance for a fun trip to Vancouver was improved by the ability to hunt for hockey sticks while exploring a new area!

This is an opinion piece, so I’ll finish with my own opinion first: Country events are not that fun, but its an easy opportunity to easily earn resources that are only available for two days out of the year. I wouldn’t recommend anyone blow their whole key stack, but you could consider those resources to be diversification of your investments. If there’s a huge demand for footballs or syrup in a few months, you’ll be glad you have some to use or sell for profit. The lack of crypto is tolerable for two days, but it takes away from the excitement. Every time I spent a blue key for 50 cowboy hats, I had to remind myself that I just burned ten cents. But my displeasure appears to be the minority opinion.

The majority of players seemed to enjoy the event, despite the lack of crypto. I was surprised by that, but aside from a few folks on reddit and the occasional Discord question on the beginner chat, “Why am I not getting crypto?” there wasn’t much of a 💩🌪️ like we’ve seen with previous nerfs. The drop rates are fair for a two day event, and although there’s no new cubie or new game mechanics, the event is still a “new” event to most players, and so they get to enjoy the same excitement that I had last year riding shotgun with Beats while he showed me how to play.