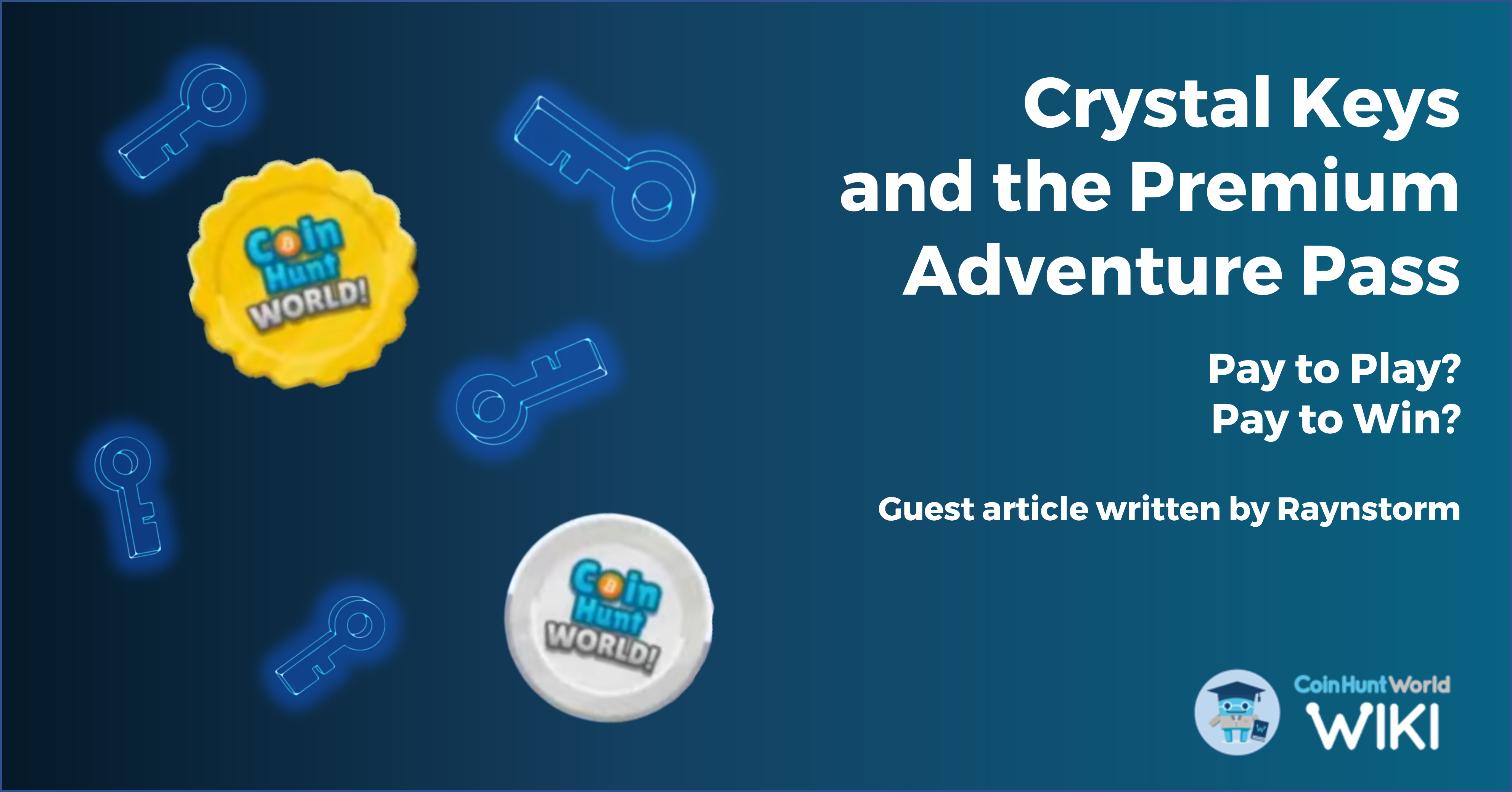 Correction: This article previously stated that the Rare Cubie Blueprint award at the end of each Adventure Pass would be available to players on the free tier. We have since been informed that there is no such reward for Free tier players, only for the players who purchase the Premium Pass.

Disclaimer: This is an opinion article. The views expressed here are the author’s views and do not represent the views of the Coin Hunt World Wiki team as a whole.

The fifth Coin Hunt World Hunters Lodge on July 15th was full of new information, but nothing they shared was more controversial than the introduction of Crystal Keys and the Adventure Pass system. We’re grateful to have all this new information, but in some ways, it left us with more questions than answers.

To talk more about these new features, the Wiki team is happy to have a guest writer on today’s article: everyone’s favorite CHW bartending streamer, Raynstorm! The rest of this article was written by him.

So Hunter’s Lodge (HL) had a lot of unanswered or vague response to each section and the Coin Hunt World (CHW) community is a buzzin. Along with the Wiki team, some of us content creators decided to help clear up what we can.

I wanted to write about the introduction of Crystal Keys (CK) and the Adventure Pass (AP) because, to me, they present biggest potential issues with the most interesting possibilities. So let’s break down what we know first, and then let’s talk about the community’s response.

What are Crystal Keys?

During Hunters Lodge 5, we were told that a new type of key will arrive in the game in “early August”. Crystal keys can be purchased by using your in-game crypto, or via the Google Play Store (200 for $19.95). Kookoopuffs also added that Crystal Keys may be awarded as prizes in the future, similar to how green and yellow keys are given as prizes for Twitter contests.

These new keys, however, are not like the other in-game keys. They don’t open vaults, and they can’t be used on the Auction House. The only currently planned use for these keys is to purchase the Premium Adventure Pass (once a month) and Structure Blueprints (SBP) when they drop in the Shop.

What is the Adventure Pass?

Beginning September 1st, 2022, every month there will be a new Adventure Pass (AP) quest to complete, which will be similar to Battle Passes in other games. In essence, it is a chain of rewards that you can work your way through by completing tasks. Every day there will be three new (randomized) daily quests to complete, and if you complete (some or all of) them you will advance through the chain.

As of writing, we have not found confirmation on any details of said quests, but I speculate they might consist of tasks such as getting 3 perfects in a row, hitting 20 system vaults, wearing the ice cubie, etc. Normal hunting is said to also advance you through it, but slowly.

As you progress through the Adventure Pass there will be “a ton of rewards”. If you pay extra for Premium and you complete the entire Adventure before the month ends, you will be rewarded with a unique rare Cubie Blueprint, which will be specific to that month and will likely never be available again.

Now comes the controversial part: for the price of 200 Crystal Keys, you can purchase a Premium Adventure Pass which will give you “premium rewards” on top of the regular rewards. Let’s take a closer look.

Free vs. Premium: What advantage is there to paying?

Many in the community are feeling that such a foray into in-app purchases might be heading dangerously close into the territory of Pay-2-Win or Pay-2-Play gaming. They have expressed, in detail, how this will affect the leaderboards by allowing AP premium users to gain an advantage. Others have mentioned how having to spend real money to build structures will give the rich the advantage, leading to further imbalance. A few people have even threatened to quitting the game over these changes, and speculation about them.

What about leaderboard points? The paid-for AP will obviously be a leg up for the paying hunters over the free-tier hunters. Some players have even stated that this move makes the game completely Pay-2-Win. And let’s be honest: the free pass will still have some rewards for free players. But like most other battle passes that we have seen in other games, it will most likely pale in comparison to the paid version.

Considering all the new changes and current nerfs, I want to take this time to explain my thoughts on this. For the most part, many questions have been cleared up and we have seen some decline in the heat over new changes. I am looking forward to the AP and the new Structures, since I can use my crypto earned in-game to purchase these items. The fact I can use in-game earned crypto suggests that these new changes are not pay-2-win at all. Perhaps something like “pay-2-improve-gains” would be more like it.

Illusionweaver said the building of structures will not affect current leaderboards, meaning either we will see some new boards coming soon or the bonuses for owning said structure will be good enough to not worry about leaderboard points. As for the Adventure Pass, I think it only makes sense to create a separate leaderboard with separate free and premium tabs. It would be unwise to mix the points with any of the three main leaderboards if they stand behind not being Pay-2-win, as paid-for Adventure Pass Cubies could skew the competition in favor of those who choose to pay.

You still have the basic core game of collect keys and hunt vaults, no out of pocket expenses. They offer the ability to pay  out of pocket or use in-game cryptocurrency, so this is not advantageous to current players one way or the other, new players may see some slowed progression. This is not inherently a bad thing, longer initial start up will give time to learn the game without getting overwhelmed by all the building and printing mechanics of the game right off the jump. I don’t personally feel using crystal keys to buy Structure blueprints as negative either as long as the costs are obtainable in-game, i.e. the vault payouts dropping lower than Adventure Pass cost monthly. (Currently if you hit perfect on all ten of your own UVs twice a day will add up to $60 USD a month average.)

In this writer’s personal opinion, the game itself is growing as a whole and is not yet in danger of becoming a Pay-2-Play / Pay-2-Win game just yet. And while it may seem like that is the direction they are taking, this is only one step of many into the future of Coin Hunters. We will see answers to the previous nerfs in later builds, as the devs shape the game into their ultimate vision and as they start marketing to more partners. Further, without touching on structures too much, the cost for upgraded UserVault (UV) structures will be around a $1 worth of crystal keys (based on a comment by Illusionweaver on Discord).

Lastly, let’s cover some definitions. If you can play a game for free and earn some crypto from doing so, it is a Play-2-Earn game, no matter what. On the other hand, if you have to pay directly out of pocket to even start playing, well, that’s a Pay2play/Pay2Earn game. When something gives you a guaranteed win to whomever pays the most, it is Pay-2-Win.

CHW charges players absolutely nothing to play the game and earn crypto; literally no cost. It is not pay2play, pay2earn, or pay2win, it is a true play2earn game with an option of putting some of those earnings back into the construction of the Cubieverse. Some people feel that it is better to use fiat and save away their crypto as an investment. Others like to spend some of the crypto they earn in-game. Choosing to spend outside fiat does not present any more advantage than spending in-game crypto that took significant grinding to achieve!

Thank you to Raynstorm for writing this guest Opinion article!

If you’d like to write an article to appear on the CHW Wiki Blog, please feel free to contact us!

View posts by Raynstorm
Check out khag's player page on the wiki!