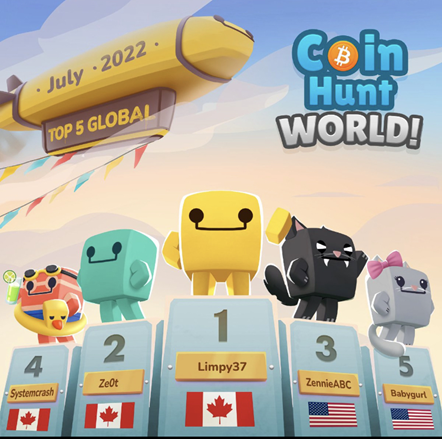 June 20th 2022… the first day of my epic Coin Hunt World leaderboard push started with completing the walking goals 1-8. Little did I know at the time, this would now become routine for the next 41 days… no matter what.

I had a mission

I had stacked numerous event blueprints, massive amounts of resources since July of 2021 and with a little luck, this Canadian small town hunter might just have a chance. Armed with the latest podcasts in hand, my best friend and hunting partner @Beautality by my side, it was go time.

After completing two weeks of 8 quest milestones per day as a warm up (and to make sure I wouldn’t die lol) July 1st began with Canada day, 904 vaults opened. It was a grind but I sure was glad to have an event right at the beginning to give me that push.

Continuous walking quests were the name of the game for the first 2 weeks, routinely checking if not missing a single walking quest was enough to maintain a top 10 global position… it was, but just barely. I would be bouncing between 8-13th regularly depending on when I was was able to complete the wq. Some days, I would have an abundance of energy and complete both walking quests in one day! Roughly 6.5 hours of walking to accomplish that on my device. Definitely not for the faint of heart! Lol

Halfway through the month, I decided to start printing. Everything I had saved up was meant for this moment. I started with the commons, worked my way up to rares, then eventually diligently printing the epics. All in the hopes that I could overtake 1st without printing the OG BP. Below is a list of all the prints I did this month and in the order of printing.

Total rough guesstimating, total LBP to take #1 globally for July of 2022 was…

A few things that helped to swing this month into my favour included the LBP being boosted for first prints at the start of the month.

My main strategy was saving first prints so that couldn’t have come at a better time. The shark BP dropped this month allowing me to snag another 500 LBP for first print. The first resource based event proved extremely prosperous in the AH selling hockey sticks and Canada cubies. After the two day Canada day event, I had managed to gather 12,450 hockey sticks and 32,750 Maple syrup.

July was also the month that @beautality had the very talented @kevostrings design my cubie avatar for my personal milestone within CHW. He does amazing work! Check it out

I was getting so close with 9 OG BPs in hand, I just couldn’t keep it in any longer. I showed the community the stack I had been working on and the reception was astonishing. So much support and hype makes this game the best there is!

The rest of the month entailed hitting as many UV’s and GV’s as possible with the time I had. If anyone says leaderboard pushes aren’t insane key sinks, they are doing it wrong! Lol.

Shortly after taking 1st global, I had the key reserves to go for my 10th OG BP. Then, on August 15th 2022, I had finally acquired it. 4035 blue keys was the final price and knowing that I’ve bought all the way up from my first OG BP at 250 blue keys (not including the green key shop drop) and all the way to the top… there’s just something about them OG’s.

As fun, addicting, and completely insane this month of July and every month leading up to was, I am smart enough to know I couldn’t have done it without my soul partner beautality. Sadly, half way through the month, she became ill and had to slow down on the 8 wq/day. Regardless, she still placed very well and I’m so proud of her!

I hope you have enjoyed reading about what it took to place 1st globally, at least for the month of July 2022. With all my current milestones being reached, I am truly looking forward to playing a different aspect of this game now, changing up some strats and continuing to stack them sats!

View posts by marlov
Check out marlov's player page on the wiki!