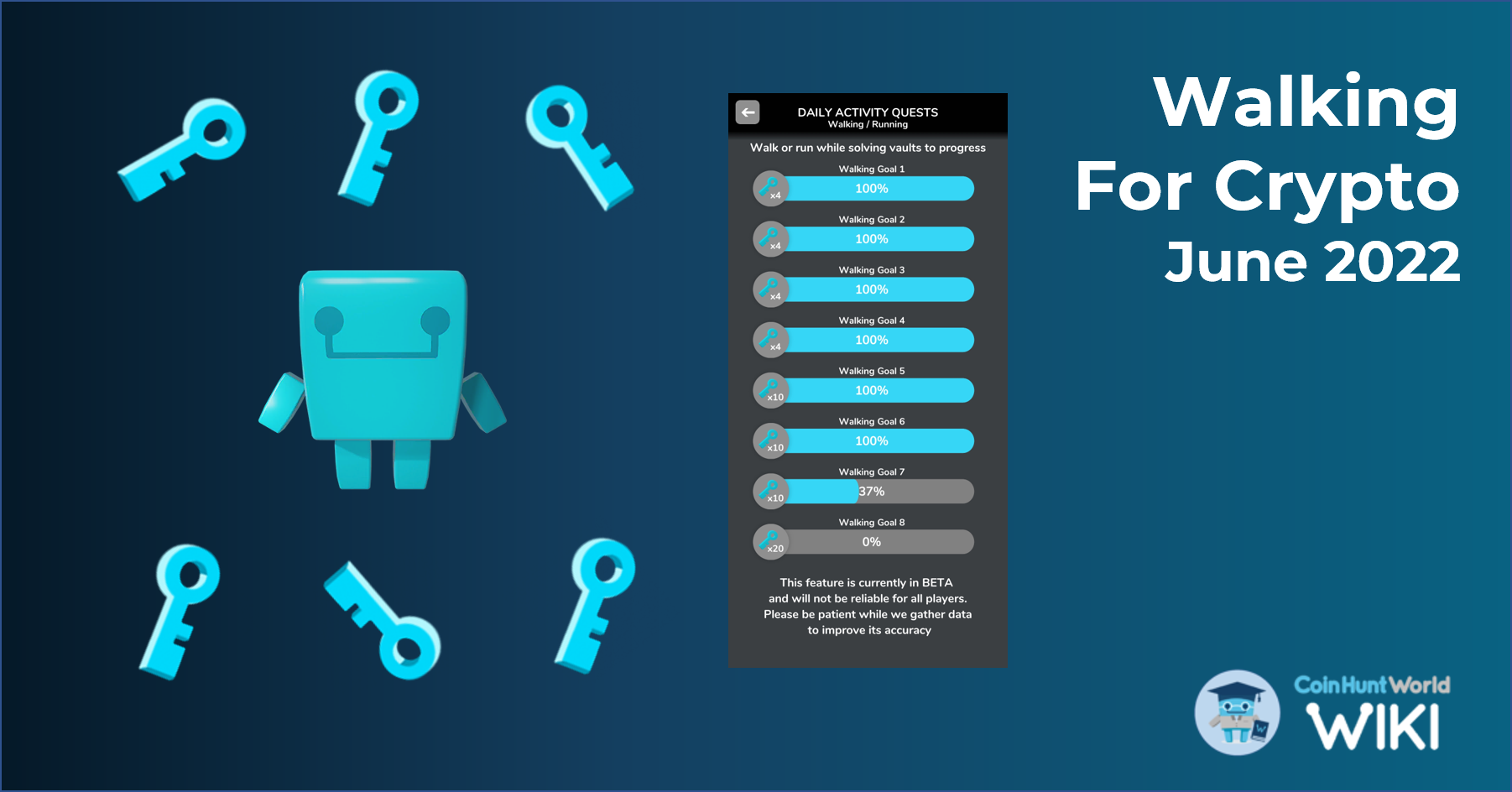 On April 18th, 2022, Coin Hunt World underwent a massive change. As a geolocation game that encourages you to get out into your neighborhood and explore, it suffered a similar problem that PokemonGo had upon release. Players who had the ability to drive while playing were taking risks behind the wheel, but also dominating many aspects of the game and had the chance to gain more rewards. Before the change, keybooths could be found in game on the map as you explored rewarding players with 1 blue key, but after the purge, keybooths were no more. The new mechanic introduced was walking for keys.

Without keybooths, earning keys is not as simple as hoping in the car with some buddies and going for a ride. Instead, we walk or run our hunting grounds to complete Activity Quests. Upon launch, it was unknown how far each of these quests would take to complete; after a few days there was a general consensus that with perfect conditions and prefect tracking, the quests were as follows:

When the Walking Activity Quest was first introduced 100 days ago, I made it my mission to complete all eight milestones daily – for two reasons.

The first reason is purely practical: the key income gained from walking is too big to ignore. I lack the right combination of access and time to devote to mastering the Auction House. There are plenty of players who can make that work for them, but I see more value in spending my time walking for keys.

Second, and more fun: it was a new challenge. There are aspects of Coin Hunt World that get very repetitive. Anyone who plays more than “casually” knows what I’m talking about. I have no doubt this will improve as the game expands, releases in more countries, adds more quests, introduces new mechanics, and overall just challenges us with more to do. But at the time, I had sort of reached a plateau in the gameplay.

Every journey begins with a single step.

The first few days were a bit tough, I had to figure out what the optimal route was for me to walk such that there were points of interest along my route and confirm that ideally my signal wasn’t going to drop at any point. After a couple days I had that figured out, but just as quickly as I had found my ideal route, the walking quests were tweaked. A slight increase in the effort required to finish them and a slight decrease to the reward obtained. Neither of these bothered me much, as I had an extension to my route that I could easily tack on near the end to increase how long I was hunting. Problem solved.

I finished out April strong completing all 8 goals in one go about half the time and splitting up the effort into 2-3 walks the other days.

The next hiccup came on May 1st. I got fairly bad shin splints in my left leg that lasted about a week and a half, and by the time they eased up in my left leg, they started up in the right. I combatted this with a lot of rest, ice, compression, and elevation, the classic R.I.C.E. technique. It still made getting out and finishing all 8 goals day after day both physically and mentally taxing, but I never felt like I was in so much pain that continuing would do any damage.

After the shin splints finally subsided, I started getting into a routine completing all 8 goals in 1 go most days. There were times when prior engagements shifted when I was able to get them done, but they remained a priority each day as part of my hunting routine.

Throughout May and June, not much changed, the weather got a bit hotter here in Southwestern Ontario, there were a couple rainy days that delayed my start time which was usually in the evening to avoid the aforementioned heat, but overall, I got into a groove and knocked them out day after day.

July started just like the previous months, the grind continued. It was on July 8th that I faced my true challenge. Rogers Communications, who provide telecommunications services to over 12 million customers went down early in the morning. Now, thankfully I had completed the first 6 goals the evening before (reset for me is 8pm), and made significant progress on goal 7. I woke up that morning not knowing what had happened, just seeing no Wi-Fi or data access while at home. Similar things have happened with my phone before for brief amounts of time, sometimes I need to restart my phone and usually that fixes things. After some problem solving, nothing seemed to be getting me service, so I went into work to see if the internet (different service provider) was online. I walked into a discussion of what was going on and realized very quickly that not only was my work day going to be more complicated, I needed a solution to finish these last walking quests in case service wasn’t back online before the day was over.

I tried not to let the outage bother me throughout the day, but at that point, I had over an 80 day streak of completion going and I wasn’t about to let some stupid billion dollar company stop me. So I asked around, got the password to the wifi extender we have out in the warehouse where I work, and spent about 15-20 minutes figuring out both where it reached and where Coin Hunt World would track my walking. After I had the limits in mind, I spent almost 2 hours walking back and forth in the small radius I had to work with. Finishing Goal 8 never felt so good.

By the time I woke up the next day, my data was back in full swing despite my wifi at home essentially only allowing me to access email. Since then I kept at it and maintained the routine I’ve developed that I know works.

With Kookoopuffs stating that things will hopefully be shaken up for those who walk the same route all the time, I hope I get challenged once again and continue to explore new things as Coin Hunt World develops through the months and years to come.

Moving Up The Leaderboard

Nobody knows exactly how many points are associated with each walking quest, however Khag has put some estimates on the Walking Quest Wiki page. Relative to anything else hunters can do daily, these points vastly outweigh everything else. There are certainly things you can do that are worth more, but not that you can currently do daily.

What these points have allowed me to do is the following:

During this time, I have hit on average, about 40-50 blue vaults and 1 green vault every other day, some days had more, some days less, but it evens out to about that much.

I’ve placed top 50 Globally in April (30th), May (9th) and June (45th) and only had 2 referrals Print Red Cubies during that time span. Suffice to say, if you’re interested in moving up the all time leaderboard list, you can focus on the Activity Quests and it’ll do a LOT for you as the current meta.

I should note that if you want to compete globally month to month, it will take a lot more than just completing the walking goals everyday. You will need to put a lot of time into hitting vaults and collecting Blueprints that you haven’t printed to get points from those as well.

We’ve also had news that Chill Wheels Activity Quests will be coming soon, be sure to check out Peregrine’s article on that HERE.

View posts by wrwilm
Check out wrwilm's player page on the wiki!