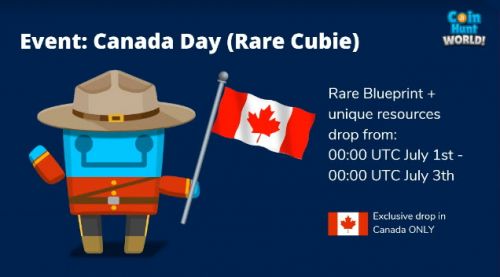 Resource Box will have a chance for any of the following items:

Players not from Canada can still obtain the above Resources as long as the Vaults are in Canada.

During the 2021 Canada Day Event, Red Boosted Vaults appeared in cities that had a fully constructed

Yellow Vault. Hunters had 72 hours to locate a

Red Vault that was randomly placed in their city. After the first player solves the

Red Vault, a 3-hour countdown starts. Once the 3 hours is done, the

Red Vault downgraded to a

Yellow Vault, and will continue to downgrade to the next vault tier every 3 hours until returned to a

Many local communities attempted to work together to ensure that a large number of players could enjoy the Boosted Vault benefits, which involved lots of communication through Discord and coordination.

Player Parkerdudeman found and solved Calgary's Red Boosted Vault within 3 hours of the event with no help or communication to the local hunters. Due to this, no one else in Calgary had an opportunity to use the vault or discover its location. Parkerdudeman struck again during the next Boosted Vault event, where they found/solved the

Red Vault at approximately 3:00am MST. Due to the lack of communication and online presence, they never communicated the vault location to the local community and Calgary hunters once again lost another opportunity to find/solve a Boosted Vault. No additional Boosted Vaults have been planned since then.

The term "parkerduded" was created meaning "to screw over" or "to be screwed over" depending on context, and the story of Parkerdudeman is known throughout the Coin Hunt World community.