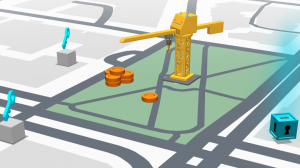 A Cubiecrane in Washington, D.C., USA.

Each increment of 10,000 resin provides the player with 100x Tier 1 Leaderboard Points.

You need to be within 30 metres of a

Cubiecrane in order to interact with it.

The first Cubiecrane to be completely fueled and become a Yellow Vault was in Vancouver. This fact was the answer to the London 2021 Purple Vault, solved by BlocBoi, with help from UK hunters DogsPoopALot and IsThisAllowed.