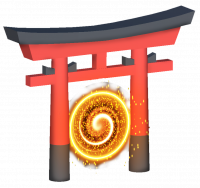 Epic torii gates are part of the Pat Morita Event. They are taller than buildings with a golden disc in the middle of the red gate. There will only be 6 epic torii gates. Each will be found in locations significant to Pat Morita's life and accomplishments. During the event, developers will release hints to help the community find the gates. Hints were released that 5 out of 6 epic torii gates are in California and 1 out of 6 are in Hawaii.

Each of the 6 epic torii gates will contain one of six NFTs. There are 10 copies of each NFTs in each torii. Each torii require 1

Red Key to unlock and will give

Red Vault Leaderboard Points. There is 100% drop rate of the Pat Morita Cubie Blueprint if you do not already have it, and you will receive the NFT Blueprint. Only 10 players will be able to access the torii, after which it will disappear.