For a complete summary of the 2021 Halloween Event, click this link! https://medium.com/coin-hunt-world/halloween-event-has-ended-83abc81e960a

Special Halloween blueprints were available during the Coin Hunt World Halloween Event 2021. Special Resources were dropping from Halloween themed resource boxes and from cauldrons that spawned during the event. In these cauldrons, you had a chance of getting the common and rare blueprints from last year but under the right circumstances you could get two brand new epic blueprints - the Witch and the Vampire Black Cat.

During the event this year,

Cubie Blueprints were only dropping from

How Could I Get These Blueprints?

During this year's event, the only way to get the Halloween

Cubie Blueprints was from

When a vault was successfully solved, there was a small chance that a

Cauldron could spawn. When this happened, you received a notification that a

Cauldron. The sonar radar mechanic is similar to the sonar radar used for Buddy Quests and for Monoliths. It was later announced that you had to hunt at low speed for 15 minutes while opening vaults to start spawing cauldrons. Also you had to wear the Halloween Cubies to be able to open the Rare and Epic cauldrons. 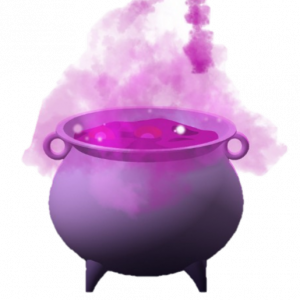 Cauldrons are a new mechanic in the game for the Halloween Event 2021, and a returning one for Halloween 2022. To interact with the Cauldron, the user must approach the location, "Stir the Stew" by drawing circles in the cauldron animation, deposit 1 key when prompted, and the cauldron will then release a Halloween

Resource Box. You cannot interact with the same cauldron more than once. All players can use a cauldron, regardless of who spawned it. The Halloween resource box you receive could contain a Halloween Event 2021 blueprint and/or any Halloween resource (including previous year's "exclusive" resources).

Cauldrons operate similarly to how the

Monoliths did in the Elemental Invasion Event. Unlike in that event, cauldrons last for 8 hours (except during Phase 1 when Common Cauldrons lasted for 1 hour), and the Vault that the cauldron replaced is unavailable to all players during that period.

Interacting with a Cauldron

In cities that had operational

Yellow Vaults, a random vault was be boosted during the event to the

Red Vault tier. Once announced, red vaults were only available for up to 48 hours. Once a player successfully solved a red vault, a 3 hour countdown began. At the end of 3 hours, the red vault reverted to a yellow vault, and continued every 3 hours to revert to the next tier down until back to its original tier.

For the Coin Hunt World Halloween Event 2021, it was announced that there was a

Canada. The only clue provided was that it is somewhere where the views are magnificient. On October 30, 2021 at 15:30 EST, player galloots found the location of this

Canada. However, nobody has opened and solved the vault.

Location of the Halloween 2021 Purple Vault

The Halloween Event 2021 featured a new category of trivia unique to the event - Halloween. This trivia category had a chance to be encountered when interacting with a vault, similar to all other trivia categories, but only for the duration of the event. Questions and Answers that were recorded from the event are listed below:

All together, the hunters:

How many Resources did the hunters find?

Blueprints did the hunters find?

How many Cauldrons did the hunters spawn?

What area spawned the most Cauldrons?

Who had first prints?

How many cubies were printed?

Who hunted the hardest during this event?

And some fun stats to end with: