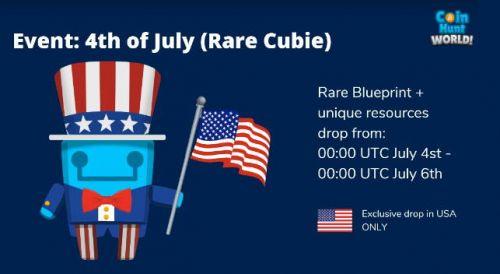 Red Boosted Vaults and a new

USA Cubie will be available during the Coin Hunt World July 4th Special Event. A special

Cubie Blueprint and special Resources will be dropping between July 4th and 6th only in the USA.

Every Resource Box will have a chance for any of the following items:

Canadian players can collect the July 4th resources too if they open vaults on US soil during the event.

For players that would like to collect all cubies in the game: The

Auction House will be released on July 30th 2021. Americans will be able to sell cubies, blueprints and resources to anyone missing out on the event.

During this event, US cities that have an active

Where can I find boosted vaults?

Boosted vaults are often found at spots with nice views. You will not find a boosted vault on a random street corner. Basically, the boosted vault is most likely to appear at a location where people would take pictures.

I found a boosted vault, now what?

They behave just like normal vaults: open them with a key, answer a trivia question and earn crypto! If you encounter a boosted vault, make sure to bring enough keys — the higher the vault tier, the harder the trivia questions!