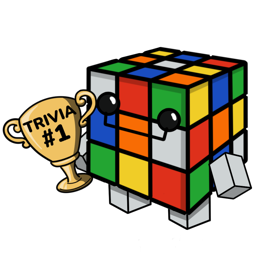 Rubix started playing CHW in early February 2021 and is active in the Chicago region.

Cubie Air Jamie on September 9, 2022. This print happened 6 and a half hours after the event started.

Rubix was a guest on

Rubix was featured in the Player Spotlight in the January 30th 2022 edition of the CHW Wiki Newsletter.

Where do you play - Hometown, usual hunting locations? Chicago! I’ve got a decent route in my neighborhood that’s pretty walkable for ‘nimble’ hunting, but also tend to hit a lot of the other hotspots around the north side of the city.

Favorite vault location? I love all vaults equally! I suppose if I had to pick favorite, it would be the green vault in the park that is essentially next door to my HQ that I can easily hit daily.

Why did you start playing CHW? I got in the habit of taking long walks around the city during the pandemic and once I stumbled across this game it seemed like an easy, fun thing to do while wandering. Then the addiction took hold…lol.

What do you like most about CHW? The constant evolution. When I started a year ago the game was basically just collect keys, open system vaults. Since then we’ve added UV’s, the Auction House, additional leaderboards, quest lines, with even more on the horizon like structures. It really helps keep things interesting and prevent the game from becoming monotonous.

How do you see the game in the future? I think they’re gonna keep surprising us. As many ‘beans’ are dropped in discord, it always feels like there is an equal amount of stuff in motion that’s in the earlier stages of development so not ready to be revealed. I have a feeling that in another year we’ll once again be looking back at an entirely different game than what we’re playing now and that’s fun to think about.

What would you change or add? I’d love to see additional types of buddy quests (which I know have been hinted at), both to add some variety to the process, but also to allow us to complete new types of quests with existing buddies; those with whom we’ve “already shared a seesaw.”